A selection of artworks, reflection and development of practice

This project is a reimagining and adjustment to the popular 1970’s Test Match Cricket board game. The main purpose of the project is to combine nostalgic gaming with more recent visually technical experiences emerging throughout games. Triggered visuals throughout gameplay are used to add to the experience creating increased involvement as well as familiarity. As well as this the chosen videos vary across the history of cricket adding to the desired collaboration of nostalgia and modernity.

A video corresponding to the position of each fielder is triggered when the metal ball hits a node. This activates a video sequence of a real life dismissal that represents a similar dismissal seen in the game. Trigger points were placed on each fielder, the stumps and also the boundary using copper wire. An Arduino was used to program the videos so that they would correspond to their correct position. Video of the crowds throughout history were also added.

The wonderment aspect of this project aims to cater to changing audience requirements. Particularly for younger generations that demand a technically visual and interactive experience. By merging these aspects into a game which was popular for a generation where experiences were based on group involvement and game mechanics, two key factors determining generational gameplay have been accessed. 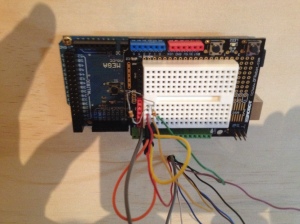 This entry was posted on April 25, 2015 by Ramblings Of A Drunken Sailor in Uncategorized.